A good sailor's preparation will go far beyond just leaving port with every necessary piece of equipment in tow. To ensure disaster is constantly kept at bay, every seafarer needs a solid idea of every navigational hazard or notable object that may come across their path, and this is where Admiralty's Sailing Directions (also known as Pilots) come in. Designed to compliment the essential cartography of standard nautical charts, these publications have been designed by the merchant mariner to be picked up and used on all classes of ocean-going vessels, detailing the most essential aspects of navigation.

Providing worldwide coverage in no less than 74 volumes, Admiralty Pilot guides contain quality colour photographs and detailed views of everything you would expect to come across (and need to know of) on your next journey. These include descriptions of the coast and off-lying features, buoyage, meteorological data, details of pilotage, regulations, port facilities and guides to major port entry. As a whole, the sailing direction series covers waters across the globe, navigable down to 150 grt, and form a comprehensive gazetteer of coastal names.

The earliest versions of sailing directions were the Portolans; a 13th century collection of written sailing instructions which contained distances and directions of the Mediterranean and eastern shore of the Atlantic, including principle harbours, coastal landmarks, depths and hazards. Skip forward a few centuries, and we find Captain Thomas Hurd - the Admiralty's second Hydrographer of the Royal Navy - overseeing the first production of their first "Sailing Directions"  in 1829. These were originally compiled from first-hand reports and descriptions of the coasts primarily from British ships, but also used data from foreign charts and publications where British sailors had not yet navigated.

Today Admiralty's sailing directions are virtually the only source of data for areas which are not covered by yachtsman's pilots. New editions of Admiralty's Pilots are published on a regular basis using studies of the latest editions of nautical charts, plus foreign sailing directions, reports from surveys and ships and any notices to marines issued by other countries or maritime authorities. Updating supplements are separately available, with any navigationally significant information issued through a weekly Admiralty Notices to Mariners bulletin.

Admiralty's sailing directions have even made the jump into the digital age as part of the United Kingdom Hydrographic Office (UKHO)'s own E-Nauctial Publications (or e-NP) series. These allow sailors to have access to pilots in a more convenient electronic format, bringing improved efficiency, accuracy and a more ready access to information. With e-NP's its possible to save and print the most relevant pages in your sailing directions, and have been approved by the Flag States of over three quarters of ships currently trading internationally.

For all future blogs relating to nautical charts and the maritime industry as a whole, keep an eye on the Seachest Facebook page, Twitter and/or Google+. 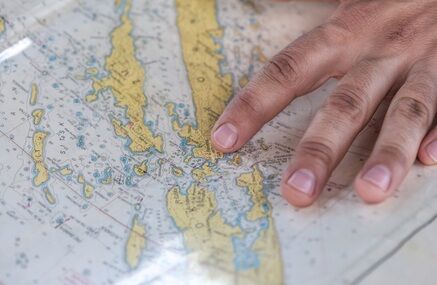 History of Sailing Instruments: Then & NowTuesday, 3rd of February 2015

The trade tools of an experienced sailor have an almost otherworldly appearance about them, at least to those who've never navigated on the water. Yet as complicated as a sextant, speed-time-distance calculator or divider may look to the uninitiated, even