Electronic charts, more so than any other recent advancement, perfectly represent the way boating and technology have sailed side by side into the 21st century. Not being subject to electrical failure, paper charts are still widely used by many sailors, but these digital ocean companions are rapidly beginning to augment and even replace more traditional methods of mapping. For this entry in the Sea Chest blog, we aim to give you a basic round-up of electronic nautical charts software, their various suppliers and some recent developments that might be worth your interest. Used with either a laptop or on board computer, PDA (more recently tablets) or a dedicated marine chart plotter, electronic navigational charts provide digital-based navigation that - like their cumbersome paper counterparts - are subject to the compliances of the International Martime Organization (IMO). They provide a constant position and navigational safety information when used in conjunction with certain charting software and GPS receivers.

Raster charts are essentially digitized scans of the paper charts (typically UKHO Admiralty charts). You can pan and zoom on these charts, but you can't access more than the present amount of detailing (to get more detail on a certain area, you need to switch the chart over). The word 'raster' refers to raster graphics, or bitmap; a dot matrix data structure that creates images using a rectangular grid of pixels. Typically Raster charts are supplied on a CD-ROM, and can be viewed using proprietary software such as seaPro Lite (more on the individual software later).

Vector charts, also referred to as ENC's, are conceived entirely as digital charts. They go beyond the simple presented navigational information with several 'layers' of helpful plotting tools and data, including depths, tidal streams, contours, and, depending on what software you're using, they can be linked dynamically to other databases to provide actual real-time info e.g. weather, tidal streams. Systems using ENC charts can also be programmed to give warning of impending danger in relation to the vessel's position and movement. Vector charts also come on CD-ROM, but are also supplied on SD cards for dedicated marine plotters.

Now we'll look at some of the more popular suppliers of charts, plotting software and other peripherals.

In 2010, the United Kingdom Hydrographic Office (UKHO) announced they'd be restructuring its Admiralty Leisure product range, which sadly included the rather useful RYA chart plotter; a great introduction to electronic navigation. Worse, in 2012, they also revealed they planned to withdraw their ARCS Skipper digital navigation service by around November 2013. However, their Admiralty Raster Chart Service (ARCS) remains, giving you their entire choice of charts in a far more handy format. What's important to note is these aren't simply scanned paper copies; they're taken directly from the digitised originals.

The selection of Imray digital charts are in a way a halfway point between raster and vector. Though they are basically electronic editions of standard Imray Charts published for PC, but with integrated GPS plotter software. The high resolution images uses the GPS to allow route planning with waypoints, with chart notes, warnings and tidal diamonds displayed as text boxes. You can download corrections, and they're available to buy as chart packs covering various ocean areas around Britain.

Jeppesen's C-MAP PC planner and vast array of digital charts will turn your humble computer into the perfect navigational tool. The PC planner comes with a USB C-Cad, or FP Card reader which features a dual slot cartridge holder and can read two separate charts simultaneously. Their C-MAP vector charts meanwhile are based, in part, on UKHO products, with additional information provided by other  public agencies and private information publishers. C-MAP pioneered what is today referred to as Object-Orientated Technology, and offer various presentation modes for the user's requirements. C-MAP charts are available in the MAX series, and earlier NT+ charts. The choice of plotter of Franck Cammas, Michel Desjoyeaux, Ellen MacArthur and many other great sailors, Maxsea's range is very highly regarded. Their  has a great compatibility range with chart formats, with their standard features supporting raster charts like Admiralty ARCS, and vector maps from C-MAP. You can recall previously used waypoints and routes on future voyages, read the screen easily at any time with Day/Dusk/Night Time display modes, and theirs is the only navigation software to include all the tides of the main ports of the world as a standard feature. Whoever you decide to help guide you, electronic nautical charts provide excellent, state-of-the-art coverage for all areas of the ocean. In the future, we hope to bring you a step by step guide to using the various software packages out there.

You can view our full range of electronic charts here. In the meantime, we'd like to know about how electronic charts serve you at sea. Which software do you use? How often have you had to upgrade? Do you prefer laptop, tablet, or are paper charts still the best tool to have? Let us know in the comments, or via our Facebook page, Twitter or Google+. 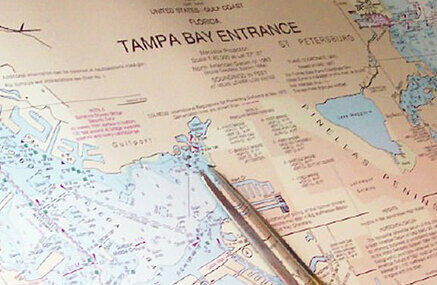