History of Sailing Instruments: Then & Now The trade tools of an experienced sailor have an almost otherworldly appearance about them, at least to those who've never navigated on the water. Yet as complicated as a sextant, speed-time-distance calculator or divider may look to the uninitiated, even seasoned skippers may be surprised if they saw the ancient predecessors to these essential sailing instruments.

In this entry of the Seachest nautical blog, we're revisiting the topic of history by doing a 'then and now' comparison of the most widely used sailing instruments, and seeing where the biggest developments have come from so that we might get our bearings for the future.

Though they are a sailing instrument that virtually the whole world is familiar with, unless you've ever used binoculars for the sake of ocean navigation, you cant really appreciate

how invaluable they are for seaferers. Our range of Steiner Binoculars, for example, are designed to offer very clear bearing readings (even in low light), and differ hugely depending on whether you're a casual captain or Royal Marine.

The first pair of binoculars were completed in 1608 by Jan Lippershey, who's widely credited as the inventor of the ordinary Dutch telescope. Larger Galilean-style binoculars were developed in the mid-1800's, and with  being considerably lighter in weight, thanks to the newly available aluminium, they were widely used for a variety of applications in WWI. The modern prism binocular came to the scene in 1854 with Ignatio Porro's Italian patent, and though both it and similar models were failed ventures, they paved the way for Achille Victor Emile Daubresse's roof binoculars and the modern variants we use today.

Also known as a divider caliper, this unique measuring devices is used in all sorts of

professions, from mechanical engineering to medicine, albeit in different shapes for each. The style most classically used for sailing uses sharpened points, so that one can pivot the other and mark the distance between two points on a nautical chart with startling accuracy.

In the UK, divider calipers were primarily used between the 1600-1700's to measure the length of coastlines against a map's scale or latitude. Whilst modern versions like the Meridian Zero Brass Divider use stainless steel tips and crossing arms, earlier versions were made of everything from wood to German silver, before mass-manufacturing was possible.

Sextants, and other Celestial Navigation Instruments

As we detailed in our History of Nautical Navigation blog, the sailing instruments that were primarily used to measure the elevation or altitude of a celestial object have gone through

countless revisions and enhancements. The Jacob's Staff - a pole with length markings - has versions cropping up in everywhere from the Bible's book of Genesis to the Song Dynasty of China (960-1279), whilst the Davis Quadrant was first described by its inventor John Davis in his Seaman's Secrets book in 1594.

The sextant was originally developed in 1757. Derived from the octant, it eventually rendered all previous celestial navigation instruments obsolete thanks to an abundance of invaluable features. These include the ability to measure celestial objects relative to the horizon, to have direct measurement of the stars and (with the help of newly developed filters) the opportunity to directly observe the Sun.

Last but not least, we look at the most vital piece of sailing equipment from the last two centuries, and its modern equivalent. Nautical charts (as well as sailing directions) have been employed by seafarer's since the sixth century BC, with versions relying on stereographic and orthographic projections dating back to the second century BC. The Portolan charts, which were first made in 13th century Italy, were a focal point within the Age of Discovery, with the English, Dutch, Spanish, Portuguese and other all vying to create more cartographically accurate charts. Geradus Mercator, who first described a map as an 'atlas', made huge improvements to these nautical charts in 1569 by adding orthogonal lines of longitude, spaced evenly, and lines of latitude spaced so that sailing courses of constant bearing were represented as straight lines (known as loxodromes). The United Kingdom Hydrographic Office (UKHO) was established in 1795, and for 200 years after have charted the world's oceans and produced nautical charts for mass consumption - in fact the Admiralty chart portfolio is stil used by nearly 70% of international shipping. Admiralty also unveiled their first electronic Raster chart service in 2000, and Vector charts in 2008. As you can read about in our guide to electronic nautical charts (ENC) software, these provide a laptop, on board computer or (more recently) a personal tablet computer with a constant position and navigational safety information when used in conjunction with certain charting software and GPS receivers. In the case of Vector charts, these go beyond just showing the cartographic data by allowing you to see real-time weather & tide info.

To keep up to date with any future blog posts on boating history, float on over to the Seachest Facebook page, Twitter and Google+. 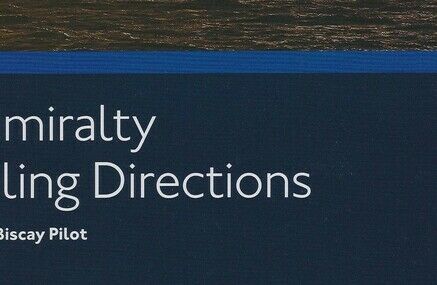 Guide to Admiralty Sailing Directions and PilotsWednesday, 25th of March 2015

A good sailor's preparation will go far beyond just leaving port with every necessary piece of equipment in tow. To ensure disaster is constantly kept at bay, every seafarer needs a solid idea of every navigational hazard or notable object that may