Why Do Ocean Sounds Help You Sleep? There's something about the sound of waves crashing, the swell of water and the rhythm of the tide that puts the body and mind into a state of total relaxation...

But why is the sound of water so calming?

If you find yourself yearning for the distance crash of breakers hitting the shore, Seachest will let you in on the secrets to those serene oceans sounds you've been looking for.

How Does Sound Impact Our Sleep?

According to a study published by Live Science, the way we understand sounds has a lot to do with how the body perceives noise as either a 'threat' or a 'non-threat'.

Loud, sudden and abrupt sounds such as an alarm clock going off or people shouting or construction work trigger a 'threat-activated vigilance system'. The system is designed as a protective measure to assess whether a fear response is needed in times of trauma or danger. For example, when you're fast asleep and wake up very suddenly as a result of noise, this indicates the setting-off of the threat-activated vigilance system within the body, helping you to react fast in time of peril.

Why Is The Sound Of The Ocean Relaxing?

Ocean sounds are the antithesis to the startling noises that trigger our threat responses - representing 'non-threatening' sounds that are typically quieter and only gradually vary in volume. The slow crashing and swelling of sea sounds are a naturally calming veil of noise that is soothing and relaxing to the brain. We, therefore, process these ocean sounds in a very different way to more abrupt noises, allowing us to relax and even sleep through these non-threatening types of audio.

How Can I Improve My Sleep, Focus & Relaxation With The Sound Of Water?

Whether you're trying to sleep or trying to unwind in your home, listening to the sound of water is a brilliant solution, and there's science to back it up...

If you live in a noisy household or block of flats, putting on an ocean themed playlist, or a long video of rainfall sounds will act to 'block out' the threatening noises that trigger your evolutionary responses as a form of 'acoustic camouflage, helping you zero in on a test you're revising for or simply stay sleeping when you're surrounded by distracting noises.

Where Can I Find The Best Ocean Sounds To Listen To?

There are thousands of videos to be found on YouTube that provide you with hours of tranquil background noise to help 'block' distracting sounds. The best videos offer an uninterrupted wall of sound that is best suited to sleeping. It is suggested that you avoid any trickling rivers or running streams when you're sleeping, particularly if you have an overactive bladder as this could exacerbate the problem, according to Orfeu Buxton's research.

Celestial Navigation: The True Art of SailingThursday, 25th of August 2016

They say there’s no school like the old school, and nowhere is that truer than celestial navigation. Even as newer technologies have streamlined sailing, this method of calculating one’s position and journey is still standard education for many yachtsman

A classic piece of nautical navigation, the sextant is an intricate and fascinating device that has been used since the eighteenth century to measure the altitude of celestial bodies, as well as horizontal and vertical angles and heights of shore objects. 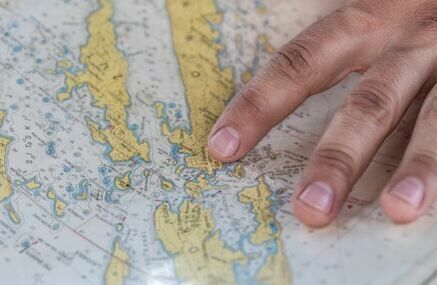 Which Essential Marine Navigation Tools Do I Need?Wednesday, 20th of March 2019

If you're serious about sailing it's a good idea to familiarise yourself with the more traditional approach to navigation.