The 5 Biggest Ports in the World

For the average, leisurely sailor or yachtsman, the harbour is a an all too familiar site. The port on the other hand, more the call for marine trading and commercial ships, is something few of us get to witness first hand. Whilst a cargo boat, a shipping container or a steel girder aren't typically thrilling sights on their own, when multiplied by the hundreds, or even thousands, it's an astonishing symbol of the advancements of human industry. In this blog, we let you take a peek at 5 modern wonders of the maritime world with the biggest ports operating today.

Easily the grandest port in the world by virtue of its high level of cargo alone, Shanghai is a crucical component to China's ecomonomy and a well oiled machine of sea trading. Located at the mouth of the Yangtze (the largest river in Asia), the early version of the port was established to take on coastal trade set up during the Qing Dynasty. In 1842 it became a treaty port, and a key part of China's international market until the Communist takeover in the city forced it to cease overseas transactions.

Now a booming symbol of economic reform, and managed by the Shanghai International Port Group, the port covers a length of quay about 20km long, and combined accounts for a quarter of China's total foreign trade. It was able to grow even further when linked to the neighbouring Yangshan Port via the Donghai Bridge - the longest sea bridge in the world.

Though behind Shanghai in terms of total shipping, the Port of Singapore is the busiest container transhipment hub in the world, accounting for a fifth of the planet's container traffic, and is also the largest publicly-owned port. Singapore itself was established as a river settlement in the late 13th century, with trading houses and warehouses being set up by Chinese and English traders when Sir Stanford Raffles established a new settlement and international port in 1819.

Connected to 600 other ports around the world, and receiving an average of 140,000 vessels every year, the port of Singapore is operated by PSA International and Jurong Port. Currently owning 75 container berths between them, there's currently a major terminal expansion project underway, which aims to add 15 more berths when fully commissioned in 2020.

The largest port in Northern China, and the biggest man-made port in the entire country, Tianjin is also one of the fastest growing in terms of cargo and container throughputs. Situated in the mouth of the Haihe River, and the main maritime gateway to Beijing, the Port of Tianjin has early history as far back as the Late Eastern Han Dynasty (which began in 25 AD).

The port waswas first opened up to foreign trade in 1860 in the aftermath of the Second Opium War, and received considerable development by European, Japanese and American powers during the Boxer Rebellion. Operated today by Tianjin Port Group Companies, the port features 159 berths, and is divided into a northern port, southern harbour, Dongjiang Port, an economic zone in the southern region, the south-east region and other auxiliary harbours.

The only non-Eastern (and European) port in this list, the Dutch Port of Rotterdam is the only place in the continent that allows unrestricted access to ships with the deepest draughts (the vertical distance between the waterline and the bottom of the hull). Stretching across a length of about 42km, before the port was established, ships going between Rotterdam and the North Sea were forced to sail around the island of Voorne-Putten to go out to sea, which could take several days or even weeks.

Most important today for its petrochemical and general cargo transhipment handlings, the harbour is an important transit point between Europe and other parts of the world, both on and off land. Interestingly, much of the container loading and stacking is handled by autonomous robotic cranes, and computer controlled chariots.

China's biggest comprehensive hub port, Guangzhou is currently reaping the expansive benefits of the buoyant economic activity of the city. Located in the middel of the Pearl River Delta (a region often considered an emerging megacity), it's currently the largest loading and discharging port for coal in China.

Let us know if you've ever had the pleasure of marvelling at these incredible feats of maritime industry. You can do so in the comments, or over at our Facebook page, through Twitter or on Google+. 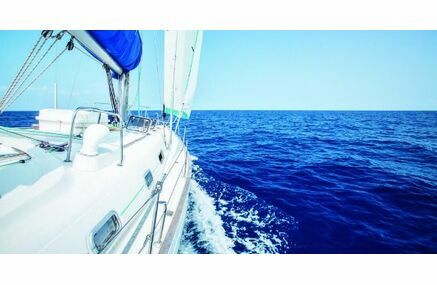 The notion of a 'luxury' cruise would have sounded beyond daft a few hundred years ago. When journeys at sea were a lifetime endeavour, sometimes without a high chance of seeing your destination, enjoying the finer points of life in the company of the ocean