8 Exclusive Islands From Around The World

Your own private island; it's the unequalled height of monetary hubris. With never-ending beautiful scenery, seclusion and, of course, sailing opportunities, all of us would have to dig deep to find any treasures not worth the trade for some of the most beautiful sun-bathed bits of land on the planet. For many, the fantasy alone is a perfectly adequate substitute, and for those people we present these 8 Exclusive Islands From Around The World, complete with breathtaking photos and a bird's eye view from Google Maps:

Few holiday destinations can stand toe-to-toe with the resort on Fregate Island and come out on top. Averaging at just short of £1500-£3000 a night, its Anse Victorin beach has been voted "The World's Best Beach" by The Times, and every inch of the isle is covered with takamaka, cashew and Indian almond trees. Home to 2000 free-roaming Giant Aldabra Tortoises, if owning the isle seems a bit beyond the reach of your wallet, believe it or not it's actually possible to rent the entirety of this conservation island to yourself for an entire day.

Just so you know, both of these islands - just a stone's throw away from Panama city - are available to purchase either separately or together. With forested rocky hills and natural protected bays, these islands would make a great candidate for your next development project after you finish putting up that pagoda in the garden. Used as a base of attack on Spanish treasure ships by pirates in the Spanish colonial times, divers still pull up gold and silver coins from buried treasure buried deep below, so who knows, the islands may end up paying for themselves!

An iconic island in the highlands, known for its turtle-like appearance, Ailsa Crag is another for-sale rock in the ocean that can be yours for a price tag of £1.5 million (hey, that was reduced from the £2.5 million it was originally put up for in 2011. Bargain). Nicknamed "Paddy's Milestone" due to it's roughly equal distance between Glasgow and Belfast, it features a ruined castle, a lighthouse built in the 1880's and a gannet colony managed by the RSPB.

With "cascading, manicured lawns", what better way to put yourself near the big apple than with your own glorious 18 bedroom house on your own exclusive island in the state of New York? Located 2000 feet south of the Canada-U.S. Border, Ina island sits comfortably among 1000 other pieces of land among the Saint Lawrence River. If your're eyeing up Ina Island, just remember that even when your floating-home costs just over a million, jealously between neighbours can still be a thing.

The private resort owned by none other than Richard Branson, the magnate's own 'Virgin Island' required $10 million dollars and 3 years to become his own private retreat. The island has become a regular haunting ground for the rich and famous; home to it's own exhibition tennis tournament, and a wedding venue for everyone from Google co-founder Larry Page to Branson's own daughter. Though open to the public by British Virgin Island's law, the security personnel on the isle are known for imposing privacy for their more high-profile guests. Even its fog-shrouded Google maps photo seems a little too co-incidental...

This is an exclusive island that looks almost too stunning to be real. It's shape is almost entirely circular, and even from far away you can make out the light glow of the fine white sand surrounding it. The Taiaro Atoll's first ever European sighting was by the crew of the Beagle in 1835, of course with Charles Darwin on board. The total seclusion of it's central lagoon makes it ideal for scientific study of its ecosystem, and the evolution of its coral reefs.

When you hear 'Turtle Island', you immediately think of mythical depictions of landmasses strapped to the back of gigantic tortoises. Whilst this exclusive island in the South Pacific may fall short of that image, it's hardly anything to sneeze at. Known for being the filming ground of the movie Blue Lagoon and a popular romantic getaway for the rich and famous, the entirety of the isle can be rented for 7 nights for...do you even need to know the price?

The dreamy, idyllic Entalula is pretty much the template for everyone's dream private island. Gorgeous beaches, scaling limestone cliffs and its own marine reserve park, it offers some of the most exhilarating diving experiences, with waters rich in colourful coral and tropical fish. Even at night, its opportunities for stargazing aren't likely to be beaten by anything else in the Palawan archipelago.

We're currently constructing a case on whether it could ever be reasonable to buy your own exclusive island. Why not help us reach a decision by letting us know your ultimate pro and con for buying your own personal coastal resort, either in the comments below, or over at our Facebook page, Twitter or via Google+. 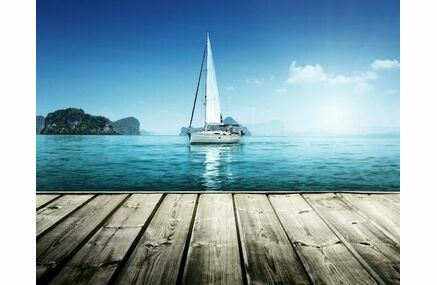 5 Amazing Mysteries of the High SeasThursday, 19th of June 2014

An ocean as large as ours could not possibly exist without a deep library of unsolved stories and unresolved sightings to wet sailor's appetites. Whether its shipwrecks, ghost stories or cryptozoology that peaks your interest, Earth's waters hold many stories